This is an article written by structural engineer Kelly Cobeen with a few edits of the author of this website, she is well known for her contributions to the field of seismic retrofitting and seismic design provisions found in the building code.

This article on Foundation Capping hopes to clearly explain what it is, why it is often recommended by engineers, contractors, and pest control companies as well determine if it is a worthwhile endeavor.

Foundation capping is peculiar to the San Francisco Bay Area.  Based on an interview with a Los Angeles Building Official and a practicing Southern California structural engineer, as well as interviews with numerous contractors and pest control professionals in Humboldt County, it became it became clear that Foundation Capping is peculiar to the Bay Area and is not practiced anywhere else in California.  Another purpose of this article is to find out why this is so.

When caps are installed the original mudsill becomes embedded in the foundation. This makes seismic retrofitting  difficult because the plywood cannot be nailed to the side of the mudsill.  Either the concrete must be chipped away so the mudsill can be accessed, or a new mudsill must be bolted to the side of the foundation (the grey part of this photo) and the floor attached to it with steel as shown here

The mudsill under the floor joist is not accessible because of a foundation cap so a new mudsill was bolted to the side of the capped foundation.

The retrofitted foundation should have some reinforcing steel connecting the cap to the existing foundation but there is really no way to tell without a metal detector. 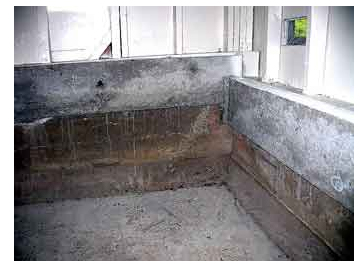 Retrofit foundation capping is recommended with some regularity by San Francisco Bay Area pest inspectors for wood framed buildings in order to increase the clearance between soil and wood wall framing.  This has nothing to do with the installation of an earthquake retrofit.  This is almost always driven by a desire to make existing buildings comply with CBC Section 2306.8, which for new construction requires a minimum clearance of six inches from earth to wood that is neither treated nor of natural resistance to decay. This was not a requirement when older houses were built and this is recommended to bring the older house “up to current code” without considering if it is really necessary and how it will impact future earthquake retrofit attempts.  Foundation caps cause the mudsill to become deeply embedded into the concrete, making a seismic retrofit very difficult.

When retrofitting the foundation with a foundation cap, the high cost and the impact it has on future seismic retrofit plans would put this at the bottom of the priority list.

Retrofit foundation capping of a concrete foundation is a complex and expensive operation that provides a number of opportunities for damage to the building.  A contractor shores up the building  just inside the foundation line in the crawlspace with “cribbing” (large beams) to hold the house in place.  The bottoms of the cripple wall studs are then cut off at the new height and they are nailed into the same mudsill of the original cripple wall.    After that the concrete is poured so that the mudsill is now embedded into the concrete which, as stated before, makes the cripple wall to shear wall conversion very difficult.

The soil to wood problem can be addressed using pressure treated wood and plastic spacers as shown in the photos below.

Wood to soil clearance is likely to be only one of many aspects of an existing building that may not conform to the current code for new construction. There is seldom any code-based requirement for an existing building to meet current requirements for new construction (change of use of the building might be one reason for such requirements). The decision to modify the existing building should be based on the ease with which modifications can be made and the likely hazard if modifications are not made. As one example, if a building has existed for 80 years without decay or pest damage, it is hard to justify expensive measures to avoid possible future decay or pest damage; periodic monitoring might make more sense in this case. Where possible, lowering of the soil is the quickest, easiest, and cheapest solution to increasing soil to wood clearance. 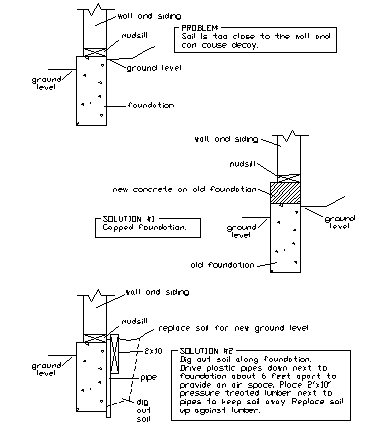 Where lowering the soil is not possible, it may be reasonable to do nothing or possibly to add decay-resistant framing.

Where foundation fracture or deterioration occurs in more than a couple of local areas, where it is determined desirable to increase the strength of the foundation, or where hardware anchorage from retrofit of woodframe portion of the building is needed (other than anchor bolts), the other two methods proposed for foundation retrofit should be pursued: replacement or parallel systems.  A foundation poured parallel to the old foundation would be the cheapest of the two alternatives because the old foundation would not have to be removed.

In all cases where damage to existing foundations appears to be caused be by soil conditions such as settlement or expansion, it is desirable to consult with a geo-technical engineer or drainage specialist. Sources of water causing deterioration should also be eliminated where possible.

Foundation capping is an expensive retrofit, and the relative benefit of foundation is probably minimal. Where capping is proposed, it is appropriate to ask what the benefit to cost ratio might be, and whether the expense of capping is justified. Foundation capping has been recommended in buildings that have unbraced cripple walls and soft first-stories (due to parking); retrofit of the cripple walls or soft story would generally produce a much greater benefit to cost ratio and possibly also reduce risk to life.